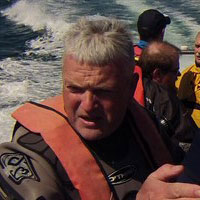 This was the title of my e mail I sent to the Kish members who were Club Diver grade and above in February 2008. The unless part was moving it 1000 miles east and 1500 miles north, the place you would have to move was an Island call Santa Maria, 15km long 8km wide, one of the nine islands that make up the Azorean Archipelago in the middle of the North Atlantic ocean. Despite warning of a strenuous week of long days, lifting and drying gear (no change there for Irish divers) a party of 6 divers put there name down for the trip. 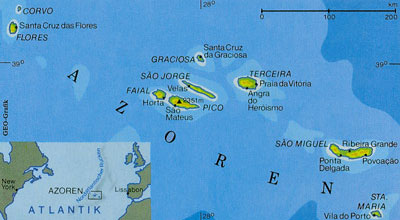 Believe it or not there is a direct flight between Dublin and Ponta Delgado on Sao Miguel the main Island. A 20 minute flight from Sao Miguel to Santa Maria leaves two hours after the direct flight from Dublin lands. These flights are operated by SATA from May until the end of September with one flight in and out of Dublin every Friday. Due to the early return flight on the Friday morning it was necessary to fly from Santa Maria on the Thursday evening to Sao Miguel. Being divers and having notified SATA in advance of taking diving equipment our baggage allowance was increased by an additional 10 kg to 30kg. This allowed all of us to take our own gear with the exception of tanks and weights. As you can know pony bottle rules apply no matter what airline you fly.

We had booked a 10 dive package, weights and air included, with Wahoo diving, the only diving centre on the island which is based almost in the centre of the island. Being centrally located allowed for divers staying in various accommodation locations to meet and load the trailer and Landrover before heading for the marina at Villa Porto, the main town on Santa Maria. 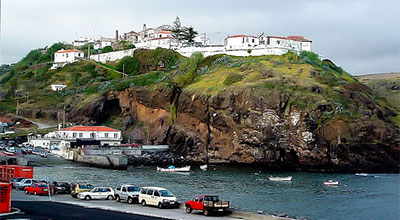 The Wahoo dive boat is a 8.4 metre BWA Rib with the capacity to hold 24 divers, the highest number on the week we were there was 12, this allowed the boat to be loaded with a second bottle for the afternoon dive. A typical day started at the dive centre at 9.30 am with the loading of gear with arrival at the Marina just after 10am with us usually leaving the Marina by 10.45. Depending on the prevailing wind Robert at Wahoo diving would have already decided on the dive locations for the day. With the wind mainly from the North and North East on the week we were there allowed us to dive the South and West sides of the island. We were usually in the water by 11am with a dive brief allowing for a 1 hour max dive with everyone returned to the anchor rope at 50 bar. The real trick was to be back to the anchor rope early and to hang at 6 meters and watch the abundant fish life go by.

With two dives a day the deeper dive was always as you would expect in the morning with a ceiling of 30 metres set, this allowed for some fantastic exploration of volcanic rock formations and sea life that was as interested in you as you are in it. The afternoon dives included caves, and an amphitheatre made up from a basalt rock formation that could be straight from the giants causeway in Antrim. The morning dives were always spectacular with Moray eels, Sting ray, large Groupers, Napoleon fish, schools of trigger fish and an abundance of fish life that in my opinion was second to none. In both Morning and afternoon dives there was always the chance of Manta Rays who on 6 of our ten dives graced us with their presence. Robert from Wahoo had only one stipulation with these big fish and that was not to touch them if you were wearing gloves as the fabric could damage their delicate skin. On one of our dives we had 4 Manta Ray swimming around us, a truly humbling experience to watch these fish with their remora attached glide magnificently in and around the group of us in the water.

One of the dives that needs is own mention. This dive was 4 miles off the North Western corner of Santa Maria and although exposed to the wind allowed for the most spectacular dive of the week. In essence the dive is on a shot line set on a pinnacle of rock whose tip lies at 42 metres its base being hundreds of meters deep. When we arrived at the site it was alive with all kinds of sea birds (always a good sign). Although running a slight current and with trailing lines set at the rear of the boat for safety, we were given the go ahead to dive, initially dropping to the 20 metre mark. From our vantage point on the line we watched Manta rays sometimes in groups of 4 coming to inspect us, we had bait balls being corralled by barracuda taking their turn to pick from the bottom of the bait ball. We had escapees from the bait balls use our first stages and hoses as temporary respite from the prowling food chain. All the time the water was spectacularly clear and blue with the best observation being at the 6-10 metre mark.

Located on the South side of the island this dive was at approx 17 metres rising to about 7 metres at the back of a 30 metre long cave. The shrimp that normally live on the roof of the cave do not like under water torches and so push to the back of the cave, so when you get to the last few metres of the cave there are thousands of shrimp looking at you and depending on the angle of your torch beam have luminescent orange eyes.

With safe water and time to kill between dives normally just under the two hours you have the opportunity to snorkel over the area of your next dive site. This not only is a fantastic way to run down you interval time but also to orientate you on what route you and your buddy will take on your next dive. With Visibility of over 25 meters you can actually see the plan of you next dive. On one of these expeditions two of our divers were joined by a Manta ray who kindly put the tip of its wing above the water nearly causing them involuntary reactions of a different kind.

Accommodation and out and about

We stayed in the 3 star hotel Praia de Lobos in the centre of Villa Porto, there are other options available including self catering and these options can be viewed on the Wahoo diving website. I would recommend you hire a car as there is some getting around between the dive centre and marina also on your rest days to see the sites of the island, the cost of which is inexpensive when shared between 3 or 4. High points include Anjos where Christopher Columbus landed on his way back from the Americas, Alto Pico the highest point on the island which on a clear day gives fabulous views of the island. There are a number of places to eat in Villa Porto including Central Pub and Restaurante Atlantida on the main street of Villa Porto. Those who take a self catering option will find well stocked inexpensive supermarkets.

Things to be mindful of:

You must have a medical that is valid within the current year; Wahoo diving will not accept the medical disclaimer in your CFT logbook as proof of a valid medical. This is a local law and failure to have one will mean a trip to the local hospital to have a medical signed off and a loss of valuable dive time. This island is not child friendly; in so far as the amenities are limited, there is a good beach at Praia and an outdoor sea pool at Anjos, these sites are patrolled by Lifeguards. Those that have partners that are into walking have fantastic costal and forest trails to follow.

To have exotic diving four hours from Dublin, in 23 degrees water temperature 25 degrees air temperature in September you cannot beat the Azores. There are dive centres on the other 8 Islands and all have their own websites however to whet you appetite I have attached the following websites to see what it is all about.